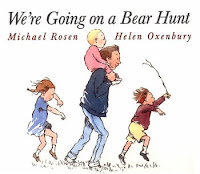 This episode was particularly interesting because it featured well-known illustrators - such as Shirley Hughes, Helen Oxenbury, Lauren Child, John Burningham and Pat Hutchins – all talking about their work and the appeal of faces, animals and toys. Also, many of the books discussed were favourites when my children were under five, so it brought all those memories back. Nicholas Tucker, a child psychologist, also discussed the merits of these books to children.

Micheal Rosen (childrens’ book laureate) presented this episode. He emphasised the importance of rhyme, rhythm and repetition for this age group – especially the pacing of rhythm & the sound of words. They can be part of a bonding experience, and this is why nursery rhymes have stuck, even though they haven’t necessarily been written for children in the first place.

In the c19th the vogue for illustration took off, with Rackham, Crane and Greenaway. However, Randolf Caldicot was the first artist to play around with pictures and add his own visual narrative. He saw the potential for subverting the relationship between words and pictures by using humour. Beatrix Potter was a great follower of Caldicot, with an instinctive idea of layout and lots of space. She was apparently the first artist to both write and illustrate her own stories (Peter Rabbit was first published in 1902). She created a unique world with memorable characters, which she developed through observation. Children can easily identify with animals – they have no apparent class or gender & every animal can be small and vunerable.

In the ‘Thomas the Tank Engine’ series (first published 1942), the animals are replaced by engines. Although the stories are thinly-disguised parables/moral tales, the faces on the trains act as a “beginner’s guide to the emotions”, which is a reason why they are so popular with this young age group.

Enid Blyton collaborated with Van der Beek (illustrator) to bring in the bright and cheerful ‘Noddy’ colour picture books, which brought toys to life. Toys are like small adults, but the child is in charge. However, many people started to question the message in the books, with the violence, golliwogs, policemen and spankings!

In the 1960’s, there were new ideas about encouraging each child’s potential and a demand for cleaner fresher books. This attracted a lot of serious artists into the field. Brian Wildsmith illustrated the ABC alphabet books in a riot of colour and texture. Pat Hutchins developed ‘Rosie’s Walk’ (a big hit with my children), where the book reads like a silent film. The hen is blissfully unaware that she is being stalked by a fox, which has a series of mishaps which the child can look out for on each page, often before the adult.

Shirley Hughes (another big hit with my children), on the other hand, illustrates real children and their real dramas, such as in ‘Dogger’, where the boy loses his favourite toy. Each picture is a little journey where the child can explore the detail. This is where learning to look can be a pleasure.

John Burningham (one of my favorite illustrators) came up with ‘Granpa’, which tackles bereavement in a sensitive way. Apparently, the book is partly based on an overheard dialogue between his daughter and her grandpa, who lived next door. Burningham uses biros, coloured pencils and paint in a childlike but not childish way. The final page shows the empty armchair where granpa used to sit, which “leaves space for the child to project her/his own emotion”. Burningham is not frightened of ambiguity.

The 1980s brought new innovations in picture books for babies. It was now understood that books can give the baby a chance to hold a mirror to the world around them and explore issues such as friendship and love. Helen Oxenbury’s ‘Friends’ was featured.

Each Peach Pear Plum (Allan & Janet Allberg) illustrates a self-enclosed world, which takes rhymes half in the child’s mind and allows hours and hours of spotting what’s going on in the pictures. This encourages play between the adult and child. It’s like a “join the dots in the story, and the child fills in the gaps.”

We’re Going on a Bearhunt’ (Rosen & Oxenbury) was adapted from an old American camp fire song. Rosen made up many of the wonderful-sounding words, such as ‘swishy-swashy’. It is memorable for the repetition and tension & how real Oxenbury makes the bear look at the end.

So Much (Trish Cook & Helen Oxenbury) has a sing-along read-aloud text and a multicultural face. Trish Cook inherited the oral tradition from her Dominican father. Oxenbury based her illustration on observation, especially of Brixton market.

Lauren Child featured at the end, with her use of humour & multi-media, in ‘Clarice Bean That’s Me’. She was originally illustrating for animation, so she saw the book as a series of scenes. Clarice Bean is a character with attitude, but ordinary too. Her Charlie & Lola books have no adults in them. (I love her characters & humour, but my children never took to them when under five, so I’m not sure how much of the humour is picked up by this age-group).

I started the illustration course wanting to do children’s books, because I’d been immersed in this world with my children for almost ten years. I loved this fairytale magical land, where everything is new and fresh. However, I often find it hard to square the idea of “less is more” with the illustrations of Shirley Hughes, John Burningham, Pat Hutchins and Janet Alberg. I know how much young children love to explore their stories with the pictures, and relate them to their own realities. So my challenge is to make my images rich with visual narrative for the child without making them too real, simple, boring or inaccessible.
Posted by anna at 13:21