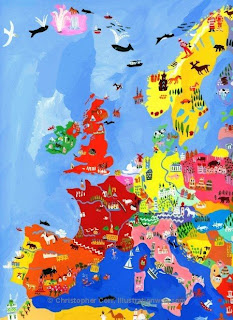 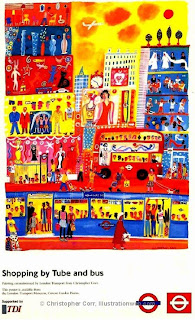 Rose & I visited Chris Corr in his studio on 4th March as part of our professional practice trip to London. Chris Corr was very welcoming and answered our questions helpfully and patiently. His studio was packed with shelves full of books, a stack of framed original paintings, colourful observational studies on the wall and a desk with work in progress. Not a computer in sight (he does use one to scan in his final work & send it off). I came away enthused & determined to do more work- even painting - without using the computer.

Influences
Chris had answered an enquiry for Liam a year or so ago about his influences and working methods, so we knew Chris’s influences included modern architecture, folk art, primitive art, the constructivists, Le Corbusier (a painter as well as an architect), Paul Klee, Ben Nicholson and Max Beckham. Chris talked enthusiastically about the current Le Corbusier exhibition at the Barbican and suggested that the British library was well worth a visit too.

Commissions
Colourful gouache paintings, noses often different colours (reflecting different surroundings). Colours influenced by travels - especially to India. Editorials, children’s books (Barefoot Books & others), adult fiction, colourful world map canvases for Habitat. His illustrations for Folio Books were amazing - Simone de Beauvoir’s The Mandarins had sumptuous full page illustrations, and yet it is an adult book. With children’s books, sometimes he teams up with a writer and other times he is teamed up with a writer. Likes to present several ideas for a job. Could see on his desk that his final painted image accurately followed a b&w line rough. His portfolio was full of his commissions.

Promotion
Chris emails stuff & rings ADs. Exhibitions of original painting too. Agent is Illustration Web, who gets him third of commissions.

Lone Wolf
Mainly works on own, but sometimes gets together with Brian Grimwood, who works quickly and uses lots computer imagery. Do work together for restaurants and magazines.

Getting started
Chris won a drawing prize at college which enabled him to live in America for 5 months. He also taught 1 day/week as a drawing tutor. His first commissions were for a newspaper to draw some jazz musicians, some architecture and some poems.

What makes the difference between success or failure as an illustrator?
Drawing, collecting, passion for your work.

What advice would you give to illustrators just starting out?
Be yourself, be organised, meet deadlines, make sure you communicate well.
Posted by anna at 11:12