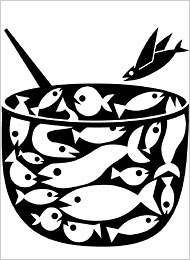 Otto gave a fascinating talk at college last Monday. He combines making screen-printed books for bookfairs with commercial illustrator work, using photoshop. In 1991, he started on a graphics design course at Bristol & in 1995 he started an MA in screen-printing at Kingston.

Mails out A1 folded screeprint sheets promo material he showed us an example of collated images of work he’d done for The Guardian. Did 2 years work for Independent On Sat magazine. Finds that prices have largely remained the same over the last 20 years for illustration work – but can maybe work faster now with computers than before. He now finds the best self-promo is doing work for daily newspapers, because work gets seen so much. When he started, for every 10 clients he saw, 1 would give him work. Often just did one job, & then not invited again. He finds that ADs in Britain more ready to give new illustrators a try & then just as ready to stop commissioning them, whereas in France, he finds it’s more a question of who you know & the relationship becomes more personal. 6 months work for Le Monde. Telegraph magazine – AD Gary Cochran very good to work with. Times supplement. Sends 4-5 roughs, usually 2-3 ideas. Goes for defined block of illustration so paper finds it harder to mess about with. Currently doing weekly Guardian comment column – gets brief at 1pm & has to get it back for 6pm. He finds that the simpler the idea, the better – but cannot always come up with a simple idea in the given time. Allows 2 hours for rough & 2 hours for artwork.

Influenced by Polish designers, film (especially Hitchcock & Fritz Lang), Russian constructivists Litzitsky, Rodchenko, Majakovski (stencil printing), renaissance painters Pousin & Bregeul (for well-researched figures) & neo-classical sculptures. Used to collect found imagery too – but not so much now. Combines photography with flat shapes – that is why he thinks he is commissioned. Has enormous reference library with 1000s images.

Reuses his images if he can – resells at cheaper price or reuses & reworks. Important to keep the copyright so can resell. Reselling old illustrations to a magazine in Germany & other publications too.

With his books, he plays around with text & collected images. Often photocopies in b&w & then screen-prints over with another colour such as red. Interested in consumerism & consumer culture influences. New Testament parallels – temptation, greed etc. Makes work he enjoys & sells at book fairs – covers costs. No mortgage.

Has tried 2 advertising jobs. Last one over 5 years ago – Welsh campaign on healthy living to go on billboards. An unpleasant 2 weeks. Took AOI advice on bidding – ended up doing work for £8,000. Advertisers prefer to work with agencies. Getting the right picture of a swimming pool & a dog really hard.

Doesn’t take portfolio around anymore. Has website, but doesn’t get much commissioned work from web. Has his stock images on display. Debut Arts agency had been keen to have Otto’s stock, but Otto would have ended up with only 25% price & would have no control over who the images went to.

Prefers to work on own, & certainly not with other illustrators. Doesn’t have agent, although he had tried to get one. Finds agents not interested in getting editorial work. Also, they want a clear style, whereas Otto is more conceptual. He used to go to London once/week with 7 appointments/day seeing agents as well as ADs.
I was surprised that no agency had snapped Otto up, but Otto seems to do a good job promoting his work and doesn't seem keen to go after more lucrative work.