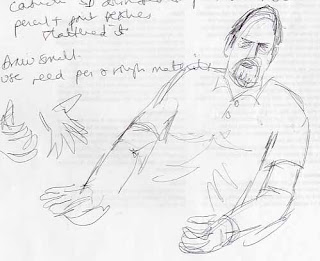 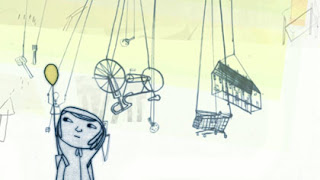 We had a very entertaining talk from Damian Gascoigne last week. Damian teaches on the animation course at Kingston & has worked as a freelance animation director for the past 25 years. His commercial work fuels his personal projects.

Research
Damian stressed the importance of research for him. He’s always snooping around, doodling, snapping, collecting. He spoke of the joy of sketching on a weeks location in Lisbon with the students last year. He particularly loves observing awkward poses made by the students.

Personal work
Recent projects ‘Compilation’ & ‘The Love Books”. He reckons you need to be obsessive to persue personal work. He kept a picture diary for years with the main theme of unrequited love. This amounted to 27 books! He exhibited part of this collection as ‘The Love Books’, by projecting some of the pages onto an enormous polystyrene book. Also projected animation of a woman rising up out of a table, like a ghost. Quite haunting.

Pitch Requiem
Damien pitched for 7 commercials last year, which he didn’t get. Luckily, his 8th attempt worked. This pitching amounted to 3 months solid work. Don’t get paid to pitch & very expensive & competitive. Toughest year so far for him was last year. Works within Picasso Pictures as a freelance animation director. He loves the work, but said you need nerves of steel in this business.

Has started moving into 3D computer animation, but from a drawn animation background. He explains why this is important to him when describing his process for his animation, ‘Careful’ on his website (www.animateonline.org/films/careful/stills.html ), as follows:-

“Firstly I questioned the way in which the 3D line work objects are constructed, by putting together deliberately mismatching surfaces of objects, so that the final piece looked liked badly made flat pack furniture. This betrayed its origins as a series of drawings.
Secondly I left in all the rough by-products of my ink drawings, spatters and blobs, inconsistent line weights, accidental transfers from page to page. The exciting thing for me was that these elements began to exist in the space as well as the main objects, trailing around on their own strange orbits, as chairs and turntables twisted and turned.
Thirdly I decided to disconnect the objects from their ground and background, because somehow every time we connected them together to a camera, the whole thing just ended up looking like an arty computer game. To do this we separated layers of line work and set them on slightly offset paths and then created faked backgrounds that did not follow the same camera path at all, but moved in independent but sympathetic directions.
Fourthly I decided to leave some objects as 2D drawings and others as full 3D objects. Placing them in the same space we allowed the nature of drawing as suggestion of form to remain close to the surface.
The thinking underpinning these decisions came from a belief that the pursuit of ‘reality’ that dominates current thinking in 3D computer animation is a misguided and limited path. We don’t need to worry about how things really look. We can see them perfectly well. It is our job as artists to imagine them again.”

Storyboard is the biggest struggle. He loves working in a team, with animators, modelmakers, technical people – all with specialist skills. Got a modelmaker to build his character & then used combination of 3D animated shapes & drawn elements to flatten the image. He draws small – uses a reed pen & rough materials.

A very thought-provoking lecture, especially on the nature of observation, drawing and re-imagining.
Posted by anna at 15:38