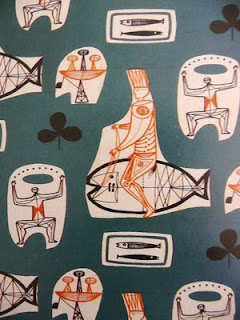 Ian has suggested I look at Robert Stewart for inspiration, and I am very impressed with his work.  He was an influential Scottish designer (1924-1995) who taught at the Glasgow School of Art 1949-84. He was a prolific designer-artist involved with printed textiles, tapestries, ceramics, fashion  & graphics. He produced work for numerous companies, including the Edinburgh Tapestry Company and Liberties (1950s)
His style is based on human forms (skittle-shaped) or faces (moon, sun, masks) and there is hardly a truly straight line in sight. His main motifs are clover leaves, spirals, triangles and circles. He uses the idea of flight a lot, too. His interesting shapes appear to be cut-outs. His style looks quirky and fresh, even today. I like the way line & shape are put together to form a pattern, with a limited selection of colour.
I found a fascinating snippet in Liz Arthur's book, Robert Stewart Design 1946-95 (London 2003, p56), where he describes his selling spree of 1950. "I did my salesman bit, carrying my case around all the best London stores. I learnt a lot ... I was kept waiting for hours, then they wouldn't even look at my wares." In Liberties, the buyer told him to 'take that rubbish away', but Mr Stewart-Liberty himself then asked him to return.
Posted by anna at 03:01