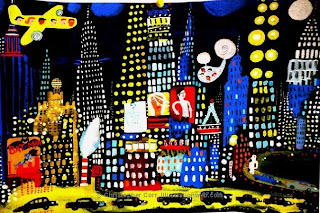 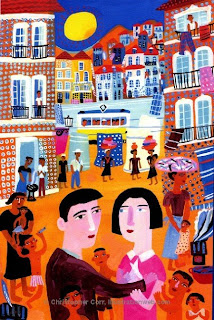 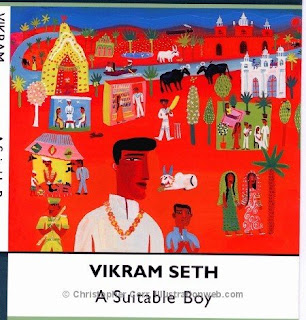 I have chosen to compare and contrast Chris Corr and Otto Dettmer as practitioners. I visited Chris in London and listened to Otto's talk last month. They are very different in their processes and practices; they operate in different markets, with few overlaps. What can I learn from this that I can apply to my work?

Chris Corr is an fine artist as well as an illustrator. He trained at the Royal College of Art and won a drawing prize to study in America. This perhaps enabled him to get started on his path as an illustrator in the travel market. He has managed to translate his talent for observational drawing and painting into successful contemporary illustrations. He also taught drawing one day/week when he was establishing himself. His colouful gouache illustrations have a clear and unmistakeable style. They are warm and tactile with a folk art feel. He only uses the computer to scan his work in.

Apart from travel illustrations, Chris’s market includes editorials, children’s books, adult fiction and world map canvases. His clients are wide-ranging and include Qantas, Windstar Cruises, Royal Mail, Folio Society, Sherbet, BBC, Barefoot Books and Habitat. His agent, Illustration Web, gets him 1/3rd of commissions. For promotion, he sends emails, contacts ADs and has exhibitions of original works. After a trip to India, he came back with a one-person show, ‘Wel-come to India’, which was followed by a book and a short BBCTV film. Royal Mail sent him to Bosnia to paint the peace-keeping troops. Although Chris works on his own, he does team up sometimes with Brian Grimwood to do work for resturants and magazines.

Otto Dettmer, on the other hand, is a conceptual illustrator who largely specialises in editorials. He started off on a graphics course in Bristol, and followed this with an MA in screen-printing at Kingston. His commercial work is a mixture of photography, found images and flat shapes worked up together on the computer. He also makes screen-printed books for bookfairs. He is also fascinated by consumerism and consumer culture. His editorial work is conceptual, clever and pared-down with a simple message, but it is not always instantly-recognisable as Otto’s work.

Otto’s illustration market is mainly confined to editorial work, although he has done 2 big advertising jobs, which he didn’t enjoy. His editorial clients include the Guardian, Independent, Telegraph, Times Supplement, Economist and Time Out. His market does extend into Europe, with work for Le Monde and Freitag. He was unable to get an agent, which he thinks is because the editorial market is not very lucrative and his style is not always clear. He is very much a lone wolf who certainly doesn’t want to work with other illustrators. He is very persistent in his marketing approach, and used to travel to London once/week with 7 appointments/day, seeing ADs and agents. He doesn’t think his early work was very good and he often didn’t get further commissions from the client, but his persistence and practice has paid off. He regularly sends out promotional materials, often original and screen-printed. He finds that getting his work into daily national papers is also very good self-promotion. He also resells his work wherever possible, and advertises this on his website.

Otto has had to embrace computer technology and compile an extensive library of images (over 1000) to enable him to meet tight editorial deadlines, where he may only have a few hours to prepare and send off the image. Chris has built up a lot of observational studies during his travels, which he is able to translate into his illustrations. Chris has a more traditional, fine-art approach than Otto, but also has more time to develop his illustrations as paintings, which he can supplement with exhibitions of original paintings. Otto, on the other hand, is in a less lucrative market and has to resell his editorial images.

What lessons can I learn from the way these 2 practitioners work? To make it in illustration you have to make striking images that communicate well, like both Chris and Otto do. I would need to work on this! I can do the observational studies, but have difficulty translating these into successful contemporary illustrations. You also have to be persistent, determined, professional, efficient, good at networking and lucky. I need to develop my networking and efficiency. I would personally prefer Chris’s broader market to Otto’s, because I think it is more interesting and varied. You can also spend more time away from the computer and not be faced with constant tight deadlines. I also prefer making and drawing to spending lots of time on the computer, but I find the computer is very useful for tweaking and adapting images. However, I think editorial work is a good way to get started, because there is so much of it (unfortunately, along with thousands of illustrators chasing it!). Also, I was hoping to do some b&w children’s illustrations for the educational market, which is apparently abundant (AOI Children’s seminar 2007), if you can draw children okay. I will also approach gardening and baby/children’s magazines. I do also occasionally exhibit my paintings and take commissions to sketch children’s portraits, and I could expand this some more with a more contemporary edge. I like the idea of having an agent who can not only bring you work, but also get your work in front of particular clients, such as Scholastic Educational Publishing. However, I need to have had some work published first and done a fair bit of promotion on my own. I also realise that finding the right agent can be difficult.

My passions include our environment, books and making images. I adore textures and materials and love working in ink, collage, clay and tissue paper. I also enjoy drawing from observation, especially people. I therefore also intend to target editorials with famous faces/climate change issues, and I aim to develop this in the final stages of my major project.