Children's Picturebooks: The Art of Visual Storytelling by Martin Salisbury and Morag Styles (2012) 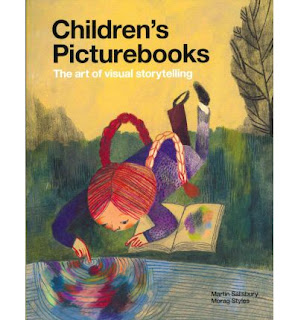 This book has enhanced my understanding of picturebooks so much, I thought I would share it with you on my blog. It is a stunning visual treat as well as a clear and concise analysis of picturebooks, written by Martin Salisbury, a Professor of Illustration and Morag Styles, a Professor of Children’s literature. The seven chapters cover the history, practice, theory  and publishing of picturebooks, intermixed with in-depth case studies. It's also reader-friendly and has an international outlook.

The chapter investigating the picturebook maker's art is particularly eye-opening. It highlights the importance of learning to see (visual literacy) and thinking through drawing, leading to the development of a personal language. Several case studies explore this process further, showing how sketching and drawing (sometimes digital) have led to personal narratives and picturebooks. Beatrice Alemagna's  Un Lion A Paris (Autrement Jeunesse, 2006) probably forms the longest professional case study in the book. Her images also grace the front and back covers.  Although her work is popular in Europe and East Asia, it is only just beginning to break through into the English market. The authors speculate whether this is because "Britain's longer tradition of illustration for children, with its roots in representational painting, has lead to narrower perceptions of graphic 'suitability' in picturebooks". Food for thought.

How do children interact with picturebooks? How does the child make sense of the 'readerly gap' created by the space and tension between what the words say and what the pictures show? The authors present some interesting results of a research project by Evelyn Avizpe and Morag Styles, which looked at the detailed reactions of children to a range of picturebooks. They found that although children love to be amused, they also like to be challenged, and picturebooks are vital in the early development of visual literacy.

The interplay of words and images is what makes a picturebook work. The images can fill in the gaps, reflect and expand on what is written and ideally leave room for the reader's own interpretations. Words and pictures can tell different stories and contradict each other in some way, such as in the celebrated example of Rosie's Walk (Pat Hutchins) where the unflustered hen is being pursued by an accident-prone fox not mentioned in the text.  Vladimir Radunsky and Chris Raschuka's Hip Hop Dog (Harper Collins NY 2010) interweaves the rhythms of the rap with the images so the images become the rap. Marts Altes's No! (published 2011) exploits the gap in understanding between a dog and it's owner in a fun way.

What is suitable for young children? Should they be protected from all things unpleasant and dangerous, including dark traditional fairytales? Chapter five looks at the way some taboo subjects, such as domestic violence, sex, war and death, have been approached in picturebooks. Norway actually subsidises some indigenous picturebooks to enable publication. Angry Man and Mum's Hair (by Svein Nyhus and Gro Dahle 2003 and 2007, Cappelen) from Norway, look at domestic violence and depression, and were produced in response to requests by therapists for conversation-piece picturebooks.  In Britain, we have The Sad Book (Micheal Rosen and Quentin Blake, Walker Books 2004) and David Mckee's The Conquerors (Anderson Press 2004) and Tusk Tusk (Anderson Press 1978). What is particularly interesting is that many smaller nations, such as Norway, value the indigenous picturebook as part of their particular cultural and artistic heritage, and provide subsidies for such books. No mention of Britain here, though.

The printing processes available at the time have traditionally dictated the artist's medium, but now any medium can be used. So why the revival in the use of printmaking processes for illustrators? Placing a technical process between the artist and the paper can produce happy accidents and lead to less self-conscious mark-making. Chapter six investigates the traditional methods of printing the way different picturebook makers use and adapt these methods today.

The book finishes on the children's publishing industry, with information about publishers, agents,  contracts and the editorial process.  Perhaps I should just mention that this book doesn't try to cover the technical issues of storyboarding  and how the page format works in detail. This information can be found in  Illustrating Books (Martin Salisbury 2004 Barrons Educational Series) and Writing With Pictures (Uri Shulevitz 1985 Watson-Guptill Publications NY).

A really excellent and thought-provoking reference book, beautifully laid-out with illustrations at almost every turn of the page, full of inspiration, practical information and fascinating insights.