I was tempted along to this workshop at the Cornerhouse by the words 'clarity' and 'simplicity'. Also a curiosity to fathom-out comics, which I've boxed off as being boy's-only stuff, full of action-packed aliens, spidermen and naughty boys sporting stripey jumpers.

I had a great time. Jim Medway was engaging fun, and the whole group, of twenty or so, got involved. He whizzed us through the world of comics and brought to my attention a whole load of new names and styles, including Charles Addams (great compositions and characters), Marjane Satrapi and Frans Masereel (amazing woodcuts). 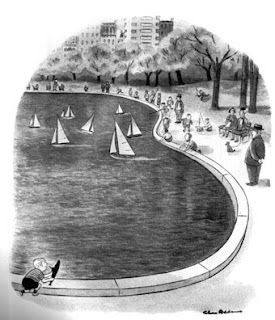 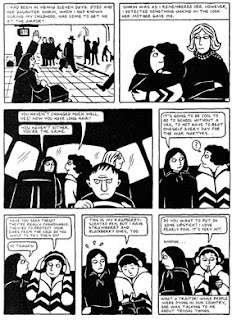 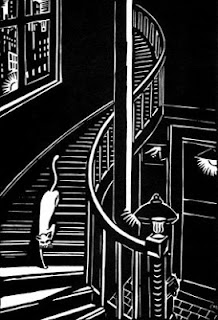 Jim's own very distinctive comic characters are anthropomorphic teenage cats, full of attitude and swagger. He is currently working on a 48 page character-based comic about 3 lads walking around Manchester, called 'Playing Out'    (to be publ. 2013 by Black Slate Books). (photos taken from slide show, sorry about poor quality) 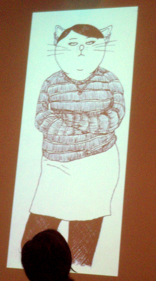 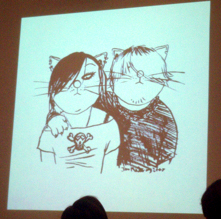 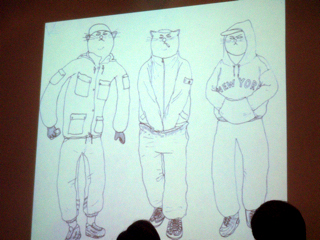 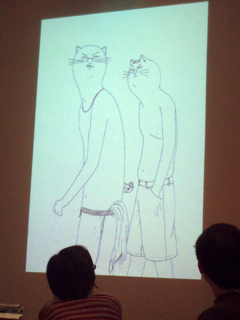 We did lots of hands-on exercises, including drawing quick cartoon self-portraits and 'who dunnit' game, where we matched the image to the person. We also drew animals in 10 seconds with our eyes shut, and most were surprisingly recognisable. Giving animals different occupations was another exercise. We were each dealt a random animal and random occupation, and we had about a minute to draw this clearly enough for others to guess what they were. Mine was a clown crab. 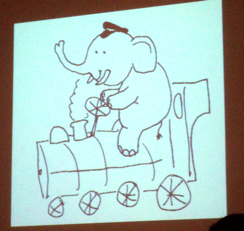 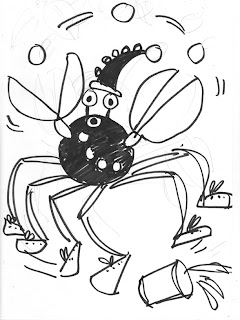 Again, we managed to guess what most of the drawings represented. Time limits seem to condense the images to essentials. Jim admitted that stereotypes and cliches help, too! We later had 3 random cards dealt, with a setting added. Mine was 'pirate elephant underwater'. Emotions could be added, too, as a 4th card. What a great way to develop characters! 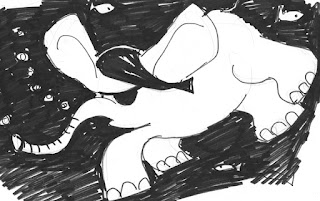 We progressed to 3-act collaborative cartoon strips, where we each filled in the first box of a comic, then passed it on, then filled in the second box of someone else's comic, then passed it on again, and finished a different person's story by filling in a third box. It reminded me of the Consequences game, where a collaboration leads to something unexpected.. Here's a scan of one of the sequences. 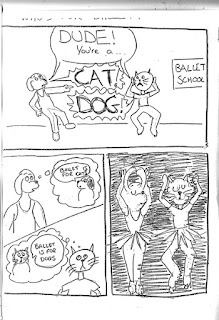 The final collaborative comic in this workshop involved the entire group and one story. We agreed on a crocodile dinner-lady character from an earlier exercise, called Sunshine, and a contrasting round schoolboy character called Alphonse. The genre was gameshow/documentary. We had a random page number each, and developed the story page-by page, person by person. A bizzare story evolved, with a body-parts gameshow, a missing leg,a hybrid body-parts being, a heart-to-heart and a happy ending. It was printed off in time for us to each take a copy home, too - our very own jam comic! 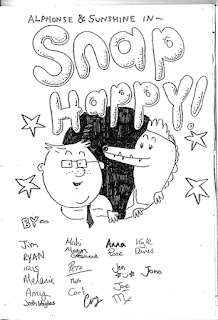