The Genius of Dahl 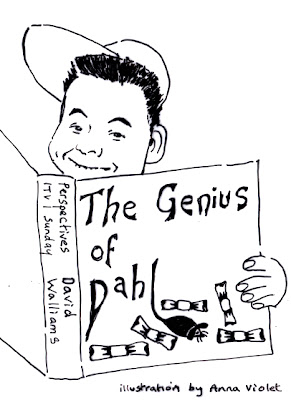 What a fascinating look at Roald Dahl it was last week. David Walliams had me hooked on his every observation, delivered with twinkly eyes.
Dahl was an outsider, a Norwegian child living in Cardiff. His father died when he was 3.
He never lost his anarchistic spirit. he hated school and always kicked against the rules.
He had a fascination with extreme characters. His dealings with Mrs Prachett, the horrible sweet shop woman he played the dead mouse prank on, never left him.
Exaggerated characters can make the story less frightening. Quentin Blake also said this about caricatures.
Dahl was always wickedly funny ("...without the humour, it's child abuse...")
His work is believable, although not realistic.
He really relished things like worms and burps. His inner child never left him.
He never described horrors, he just says that they happened.
"...and then it gets worse." He liked putting his characters in a stew.
In Dahl's world, a granny can be poisoned by a grandson, parents can be eaten by a rhino, and somehow this is acceptable. True genius?