I'm really chuffed that my work has been selected to be part of an exhibition in Manchester starting this week.
This is the first Manchester and Salford Illustrated exhibition (#MASI)  at 52 Princess Street, Manchester 27th October – 10th November
http://www.manchesterandsalfordillustrated.co.uk/
30 local illustrators will be showing their work under the banner of "What Manchester means to Me." Prints will be available for sale to raise money for the Manchester-based charity, the Wood Street Mission.
Here's a peek of my submission! 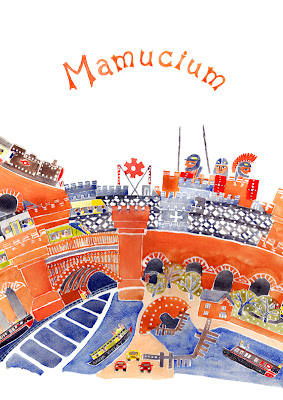 This is the thinking behind it:-

What Does Manchester Mean to Me?
I am awestruck by Castlefield's viaducts and bridges. Castlefield was the heart of Manchester's industrial revolution and remains an iconic symbol of the making of Manchester to me. Here we have the terminus of the world's first industrial canal and also the world's first passenger railway. The Bridgewater and Rochdale canals join at this canal basin, which is crossed by four enormous Victorian viaducts and an elegant modern footbridge, Merchants Bridge. Two of the viaducts are still used by trains and metrolink uses another.
Castlefield is also the site of the Roman fort, Mamucium. This is the origin of the name of Manchester. The fort appears to have inspired some of the amazing castellations and towers on one of the viaducts, too. I often wonder what the soldiers based at Mamucium would make of this area today.
My image illustrates this part of Castlefield with the viaducts, canal basin, leisure boats, trains and metrolink. The soldiers at the fort, Mamucium, look over the scene.
Posted by anna at 08:55